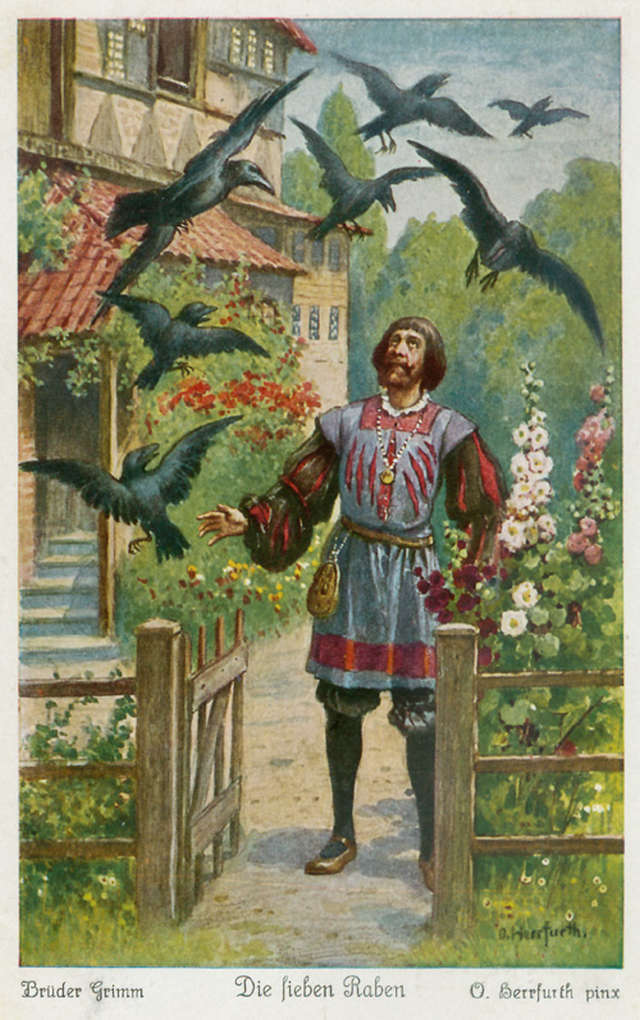 Once upon a time, there was a family with seven children, all boys. Especially father wished for a daughter and after all the years of waiting for his wish came true. But the little baby girl was so small and ill-looking they decided to baptize her at home.

Father sent his sons to the well. There was so much shuffling the pitcher felt in the well. They became afraid of their father’s anger so none of them didn’t want to return home. Indeed the father became angry because it took so long and he still didn’t get the water he said: “They are surely playing tricks instead of doing what they should. I wish they turn into ravens.” 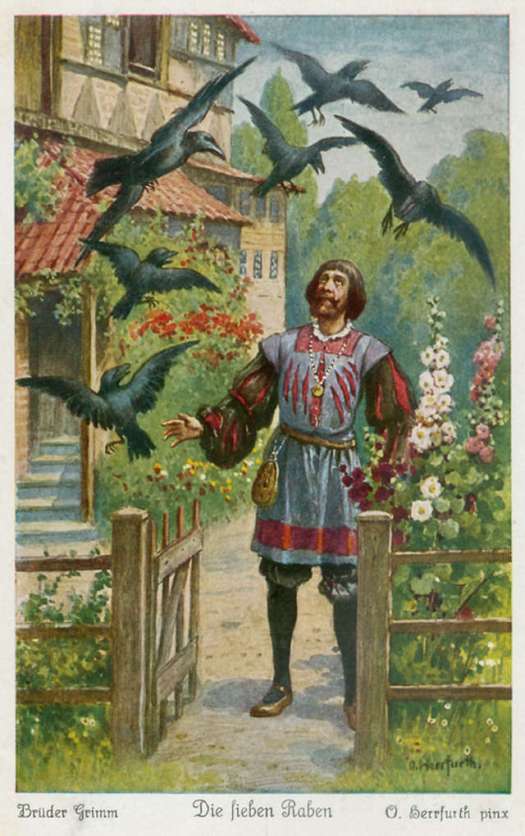 Right after that seven ravens flew by the window up and away. So parents lost all seven sons thanks to the curse. The good news was their daughter soon became much stronger and raise into a healthy and smart girl. She didn’t know she had seven brothers until neighbors told her and parents were forced to stop hiding the truth from her.

It didn’t help they told her she is not guilty of the faith of her brothers, she was determined to find them and save them no matter what it would take. She packed only some food, drink, a stool to rest and her mother’s ring. She went in the world, traveled everywhere asking about seven ravens, but nothing. 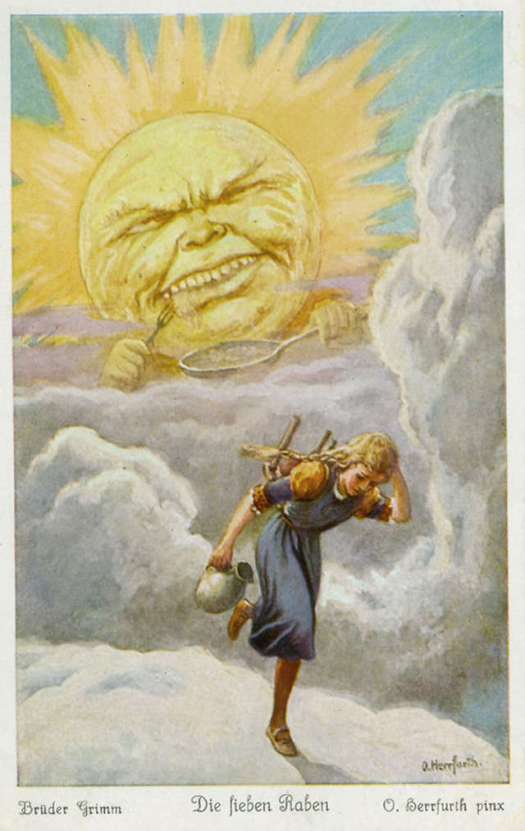 Finally, she went to the end of the world. She tried to get some useful info from the son but it was too hot and it tried to burn her. 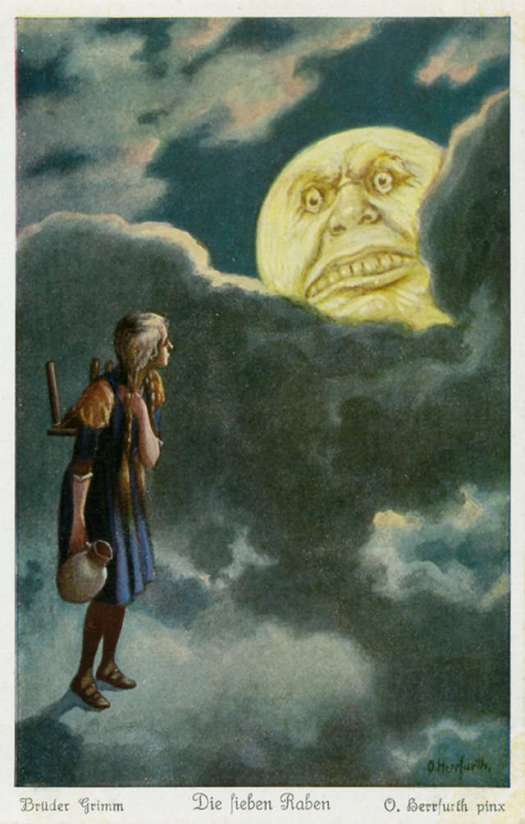 Moon was not much better. It was cold and tried to eat her. 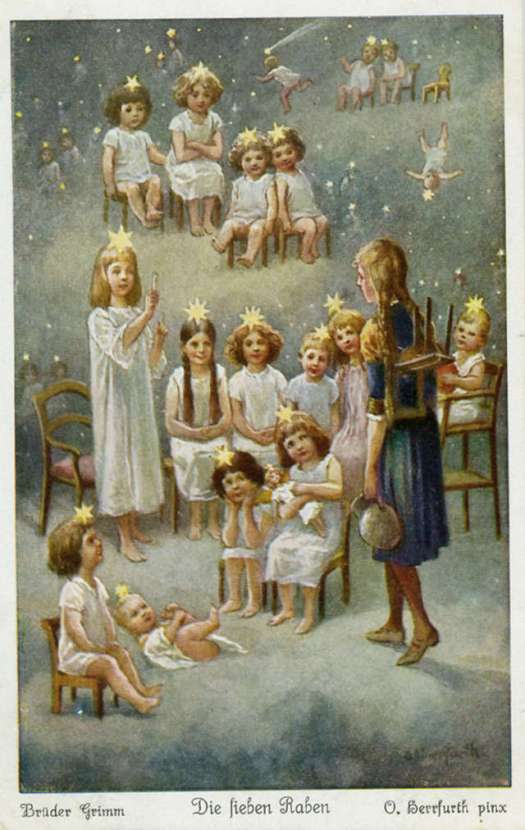 Fortunately, she visited the stars and one of them told her that she must find a glass mountain. The star gave her a chicken bone and told her she’ll need it to open the mountain. 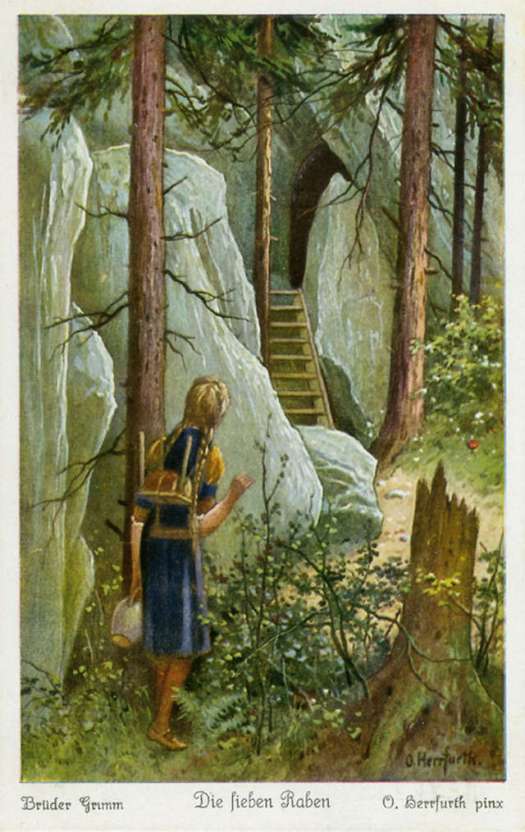 Determined to unlock the door anyway she cut off her little finger and opened the glass mountain with it. a dwarf came to her asking why she came. She told him she came to find seven ravens. He said they are out but they should be back soon.

The girl was taken to a dining room where seven plates and seven cups were already waiting for her brothers. she ate a morsel from each plate and sipped a drop of drink from each cup. She dropped the ring in the last cup. Then she hid. Her brothers returned right after that. They immediately noticed somebody ate their food and drank their drink. The youngest of the brothers found a ring in his cup. He recognized it and said he hopes their sister came to rescue them. 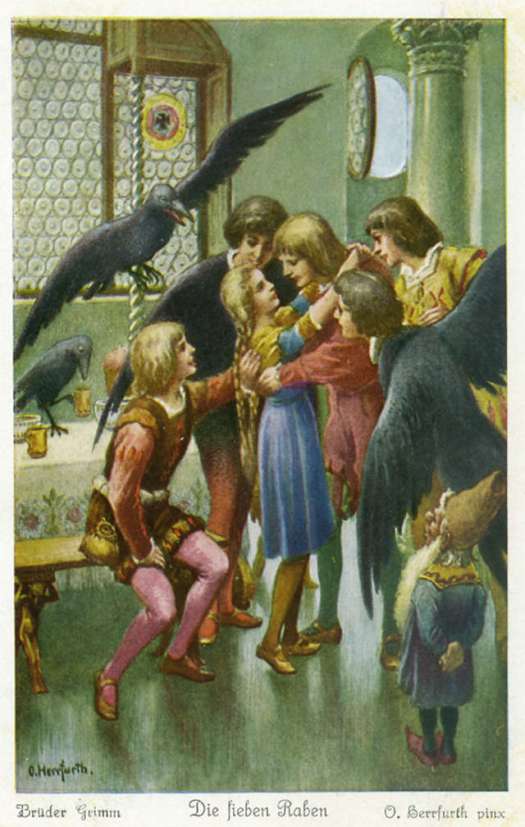 Similarities with other well-known fairy tales:

This fairy tale shares several important elements with numerous well-known tales. Let’s mention some of them one by one:

* Father who got his kids into trouble: a great example is a miller in Rumpelstiltskin, who claims his daughter can spin straw into gold, jeopardizing her life in hands of a greedy king.
* Brothers turned into birds: Brothers Grimm wrote similarly themed Six Swans and Twelve Brothers, Andersen Wild Swans, Asbjornsen and Moe The Twelve Wild Ducks, …
* Magical number seven: there are several examples of fairy tales where number seven occurs, The Snow White and Seven Dwarfs being most famous of all.
* Search for a dear person or more persons lasting for an extended period and traveling ‘to the end of the world’: we immediately remember Rapunzel, East of the Sun West of the Moon, Snow Queen, …
* Importance of a chicken bone: a bone is a powerful symbol as well, let’s just remember Hansel and Gretel where the imprisoned boy shows a chicken bone instead of his finger to the witch trying to trick her he is not fat enough to be eaten.
* A glass mountain is a powerful symbol of an achievement which is hard, almost impossible to get: a perfect example is, of course, The Glass Mountain, Polish fairy tale included in Yellow Fairy Tale Book by Andrew Lang
* Eating and drinking from others’ plates and cups: we are at Snow White again, but the same happened at several other fairy tales (Goldilocks, …)

This is a text widget, which allows you to add text or HTML to your sidebar. You can use them to display text, links, images, HTML, or a combination of these. Edit them in the Widget section of the Customizer.
Loading Comments...
%d bloggers like this: